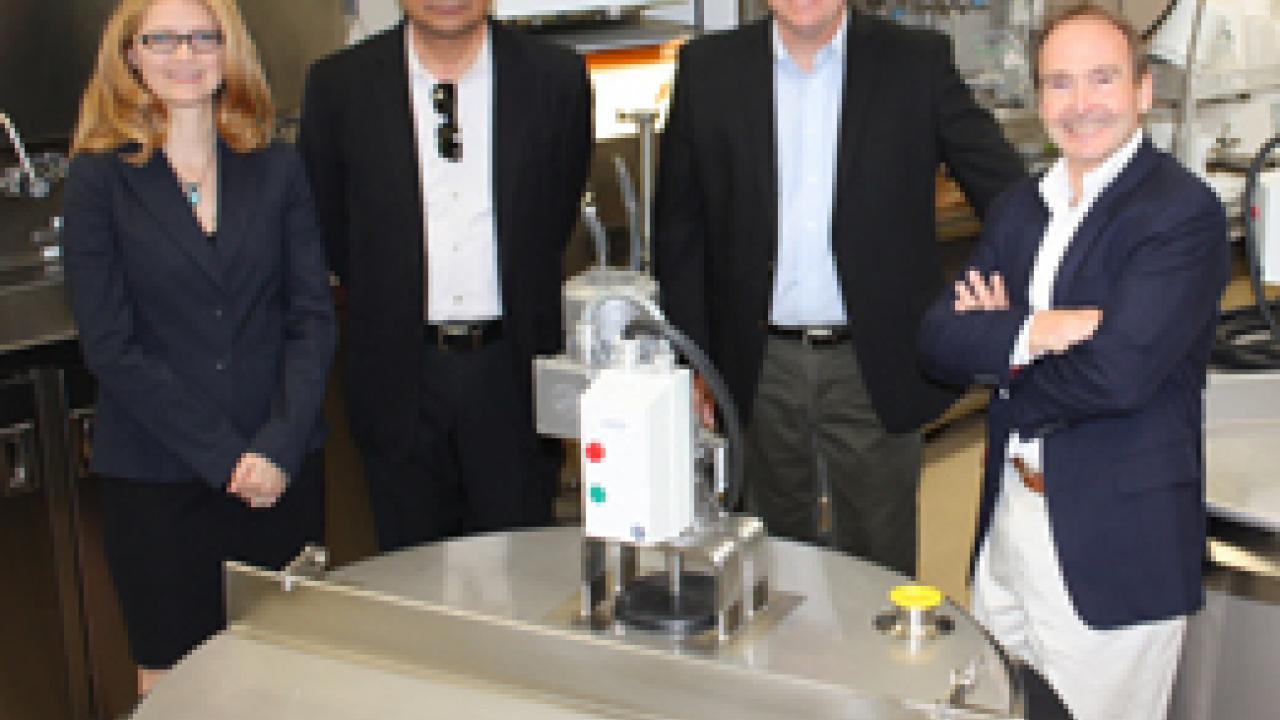 At UC Davis, collaborative research — linking scientists across the campus from multiple fields of expertise — has led to significant advancements in many areas, including our understanding of the benefits of breast milk.

While the immune protection it provides has long been known, work in this area stalled until scientists developed the technology to look more closely at oligosaccharides, a sugary component with a substantial presence in milk.

The Milk Bioactives Program, based in the Foods for Health Institute at UC Davis, took up the cause in 2004 to collaboratively deconstruct milk and its role in developing the gut microbiota of infants. The fats, proteins and sugars in breast milk are regularly replicated for infant formulas, but the UC Davis team wanted to look at another major component: human milk oligosaccharides (HMOs). They are indigestible and have no nutritive value to the baby. So the researchers sought to determine their function in an infant’s intestine.

More recently, the UC Davis team has set its sights on working to develop biomarkers, diagnostics and new products for protection of the fragile intestine and prevention and resolution of inflammation.

“The UC Davis Milk Bioactives Program has followed a wonderfully collaborative and productive path,” said Mills. “Our initial focus on undigested oligosaccharides has expanded to all manner of bioactive molecules in milk and the amazing cohort of protective ‘Milk-Oriented Microbes’ — we like to call them MOMs — that milk enriches in the infant intestine.”

The group also recently determined that milk proteins actually encode the means for their own strategic digestion to produce peptides that protect the gut and train the immune system, Mills added. “[Our] research is illustrating how foods can feed a healthy gut microbiota, protect the host and properly tune the immune system — lessons desperately needed in a world simultaneously facing problems of obesity, starvation, diet-related immune disorders and many more tremendous diet-related challenges,” he said.

This research is partially funded by the Research Investments in the Sciences and Engineering (RISE) program sponsored by the UC Davis Office of Research. RISE launched in 2012 to further improve research excellence on campus by bringing together interdisciplinary teams to carry out joint research activities in areas most beneficial to society.

After a rigorous review process, the milk program was one of 13 projects selected for funding to work together on further research.

“[Through RISE], we’ve recruited all sorts of scientists to understand the role of the microbiota in various aspects of protecting a damaged gut and using the strategy of this B. infantis combined with the right oligosaccharides to protect it,” said German in a recent presentation. “We’ve seen it time after time, chronic infection. And getting the right bacteria in the intestine is highly protective.”

The milk initiative unites scientists from the College of Agricultural and Environmental Sciences, the School of Medicine, School of Veterinary Medicine and more, further highlighting the interdisciplinary focus of the programs supported by RISE.

In September, the UC Davis Milk Bioactives group was awarded a $4.2 million grant, funded by the National Institutes of Health’s National Center for Complementary and Alternative Medicine, to further study milk’s role in gastrointestinal health. In October, the group was also given a $2.7 million award from the NIH’s National Cancer Institute to address the gut inflammation that leads to liver cancer. Yu-Jui Yvonne Wan, vice chair for research in the department of pathology and laboratory medicine., leads this latter study.

“How does this relate to cancer?” German asked rhetorically. “The barrier of the intestine is constantly under threat and chronic infection can weaken those junctions. B. infantis displaces bacteria and strengthens the barrier function in the gut.”

Altogether, the program has obtained more than $20 million in funding in the last 10 years and has generated more than 200 publications.

Their work, as reported recently in the August 15, 2014, issue of Science magazine, has implications in medicine and the development of pharmaceuticals, prebiotics and probiotics.

In fact, the group has started Evolve Biosystems Inc. to develop patents and bring probiotic-based biotherapeutics to market. The probiotic bacteria, activated with specific prebiotic oligosaccharides and delivery systems, provide and maintain a healthy microbiome in all infants during the first six months of life, according to the company.

And through further research and the group’s participation in RISE, the team can further understand how controlling bacteria in the gut can limit inflammation not at the expense of suppressing immunity and even monitor and affect metabolism.

All of this, German emphasized, is a lesson from evolution and the power of milk.

Added Mills, “Milk is the only food that conspicuously evolved to simultaneously protect, nourish and improve human health. It has already created the lesson plan for how this is done; we just need to be attentive students and we will be able to apply that knowledge to improve human health in a variety of realms.”

Mother's genes can influences the bacteria in her baby's gut

If you would like more information about CHAMMP, please send your inquires to chammp@ucdavis.edu